Let’s focus on taking steps that will protect the unique traits that keep Vermont, well, Vermonty. 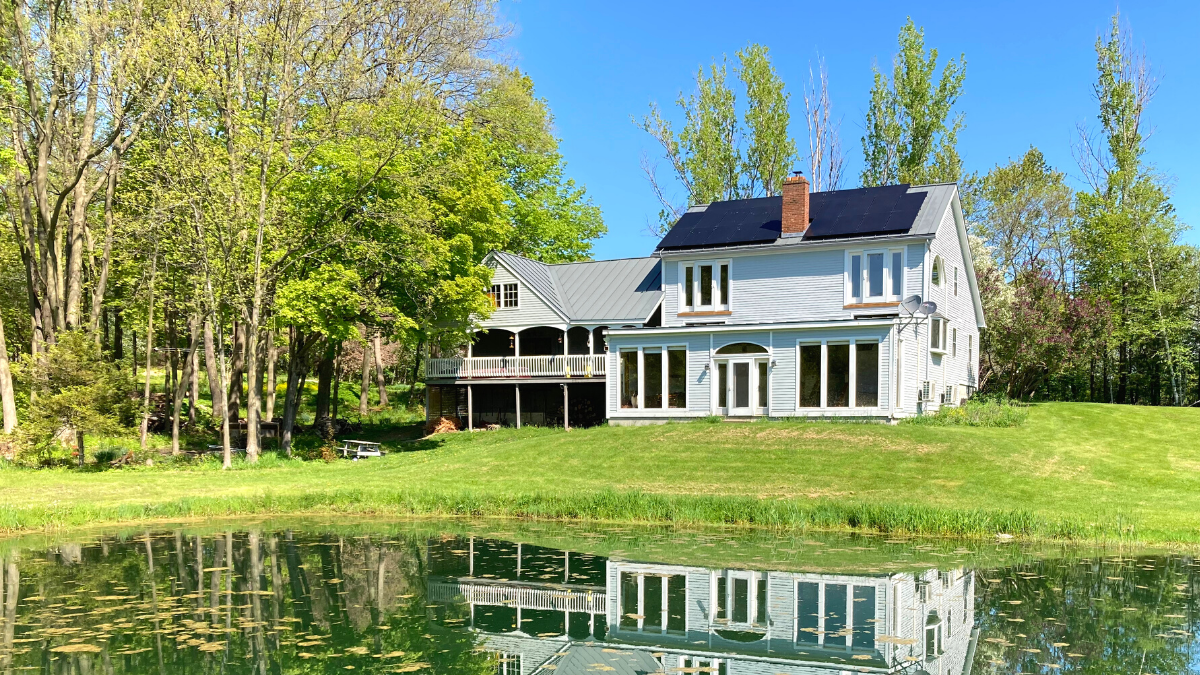 Whether it’s the quaint covered bridges or the thriving local farm scene, climate change is eroding the character of the Green Mountain State through more swings in extreme temperatures, severe storms, frequent flooding, and invasive species.

With so much richness at stake, our day-to-day decisions have never been more important. One of the most impactful choices you can make is where your power comes from and people can rest assured that when they decide to go solar, this decision is followed by a multitude of environmental benefits.

Vermont has the highest level of greenhouse gas emissions per capita in the Northeast and is, unfortunately, the only state whose emissions have increased in the last 30 years, according to the Vermont Greenhouse Gas Emissions Inventory and Forecast report. Just think about our heating alone! Energy Action Network reports that nearly 30% of Vermont’s carbon footprint comes from building heating and cooling costs—that’s 2.68 million metric tons of carbon in one year!

However, we can’t afford to just accept these facts and move on with business as usual. There are things we can do to curb this dirty energy habit and head in a direction of kicking it for good. Solar energy allows us to harness the benefits of clean, renewable energy and it has never been easier or more affordable.

“One of the main motivators of going solar is the environmental benefit,” says Marcus Shapiro, Senior Solar Advisor at Green Mountain Solar. “Houses are one of the highest users of fossil fuels. When people can produce all their own power at their house via renewable energy sources like solar, they take control of their own power, taking a step to bring their carbon footprint down and reduce fossil fuel usage overall.”

To really make the most out of solar, think about the most energy-intensive household components that run on fossil fuels, like heating or a gas-powered drier. If you swap these for electric versions and power them with the sun, you’re doubling down on your green investment.

“When people are producing their own solar on-site, they figure they might as well transfer everything else to electric,” Marcus adds, “so they add pieces like a heat pump or an electric hot water heater, that would otherwise be fueled by propane, oil or natural gas.”

Plus, it’s cheaper than its fossil fuel counterparts. According to the International Energy Agency (IEA), the cost per megawatt of solar energy is below that of fossil fuels worldwide. When things are more affordable, they become more accessible—and accessibility will drive the transition away from fossil fuels and accelerate the progress toward a greener planet.

Now, if that isn’t reason enough to explore solar, let’s add the dynamic duo of solar and battery backup. More than a third of people interested in solar also consider an energy storage solution to pair with it, according to a recent solar industry survey. The ability to store power generated on site is simply a gift of independence, resilience, and true efficiency.

Most people think of batteries for the peace of mind when the power goes out. But in Vermont batteries provide another environmental defense as well, thanks to Green Mountain Power’s (GMP) programs (the Bring Your Own Device program and Tesla Powerwall lease program).

It all starts with the grid. The grid is pretty good at meeting our normal, day-to-day energy needs. But what happens on a sticky, Vermont summer day when we all turn on our air conditioners? When there is a high demand on the electric grid—called a peak event—the additional power needs to come from somewhere. Utility companies turn to power plants that only switch on during these peak events. These power plants are called peaker plants and they’re expensive and run on some of the dirtiest fossil fuels.

“Distributed solar allows us to have a more resilient grid,” said Rob Dunn, project manager and battery installer at Green Mountain Solar. “We can minimize peak demands, which requires the worst dirtiest energy source in the grid, so we are only using the grid when it is the most efficient and cleanest. We are cleaning the grid up while intelligently using it when it suits us, environmentally speaking.”

Bingo. These programs have a far-reaching positive impact on how we depend on and tap into the energy. By changing our overly centralized grid into something that is versatile and resilient, we will naturally transition away from traditionally used fuels that no longer serve us.

Vermonters get the importance of local. But what does it mean for your electricity to be home-grown? When you produce your power right on site, it’s more efficient. “A lot of the losses we have in our production is through the actual transmission of electricity,” Dunn explains. “So, by minimizing the transmission we reduce the lost energy and can more adequately have power produced and utilized without having to send it halfway across the country or across country lines.”

When the natural world is thriving, entire ecosystems flourish and that includes us humans. As Vermonters, we take pride in our Green Mountains, glistening waters of Lake Champlain, and our crisp air (South Burlington toggling between being ranked as #1 & #2 in the country for air quality in 2020 according to Forbes and Stacker.com,) but Vermont doesn’t exist in a bubble.

One of the biggest themes that environmentalists speak up about is the fact that society treats the environment like it is an infinite open sewer. The problem with this is that… it is not! The atmosphere is shared, so while our air is some of the cleanest in the country, we are easily contributing to pollution and emissions elsewhere. The saying, “think global, act local” is as relevant today as ever.

It is time to walk the walk and hold ourselves accountable, and the best way to do that is to mitigate our atmospheric inputs. The National Renewable Energy Laboratory states that 40of man-made carbon dioxide emissions, 23% of nitrogen oxide emissions, and 67% of sulfur dioxide emissions in the nation are caused by fossil fuel-fired plants.

Solar electricity generation involves zero fossil fuel combustion and therefore no harmful energy use at the source. In fact, through Q2 2020, the nation now has more than 97.2 gigawatts of cumulative installed solar electric capacity, which offsets more than 110 million metric tons of CO2 emissions according to a recent U.S. Solar Market Insight Report. Essentially, a ground-mount or rooftop solar has the power (pun intended) to address climate change on a global level and protect human beings from the catastrophic environmental change potential.

Solar has some exclusively local environmental benefits that we notice here in Vermont. Panels don’t impact fish ecosystems like dams do, have noise like wind turbines do, use water like steam generation does, and they definitely don’t come with smokestacks. A house’s roof, that would otherwise be collecting heat and jacking up cooling costs in the summer can be incredibly productive with solar.

No Time to Wait

The transition to clean, quiet, renewable energy is inevitable, but it is the rate in which we do so that really matters as we try to beat the clock the Intergovernmental Panel on Climate Change has set. Vermont can be the leader in this fight for our future. It is time to be the state that others look up to in order to inform their renewable energy progress.

Campbell-Anderson sums it up beautifully, “From 2014-2019, Vermont solar saved Vermonters $79 million in electricity costs and an additional $93 million in public health and avoided CO2. If not for local solar, electric rates would be higher for everyone, we would experience significantly higher health costs, and pay a higher price to mitigate damage from climate change.”

The benefits are all around us and they are waiting to be tapped into.